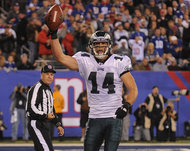 PHILADELPHIA — As a furor escalated over the use of a racial epithet by Eagles receiver Riley Cooper, and Philadelphia’s mayor criticized the team for issuing no punishment beyond a fine, Cooper took an indefinite leave Friday to seek counseling.
Michael A. Nutter, Philadelphia’s mayor, called the receiver’s remarks “repugnant, insensitive and ignorant.”
“This incident is a disgrace and cannot be excused by just paying a fine, as if it were a parking ticket,” Nutter, who is black, said in a statement to ESPN.
Chip Kelly, the Eagles’ first-year coach, said the team planned for Cooper to return. But some of Cooper’s teammates have expressed stunned indignation at his behavior. And Nutter’s remarks seemed certain to add pressure on the Eagles to part ways with the receiver.
Had this incident involved a city official instead of an athlete, Nutter said, “I would insist on a suspension at a minimum and would seriously have to evaluate terminating such an individual.”
At a Kenny Chesney concert here in June, Cooper said he had been drinking when he argued with a black security guard and used a racial slur in threatening to fight every black person in sight.
After video of the incident surfaced this week, Cooper apologized to his teammates. The Eagles issued a fine of an undisclosed amount. The N.F.L. said it would take no further action.
On Friday, Cooper left the team for unspecified counseling.
“My actions were inexcusable,” Cooper, 25, said in a statement, adding that recent days had been “incredibly difficult for me.
read more via Eagles Receiver Who Used Slur Takes Leave Amid Uproar