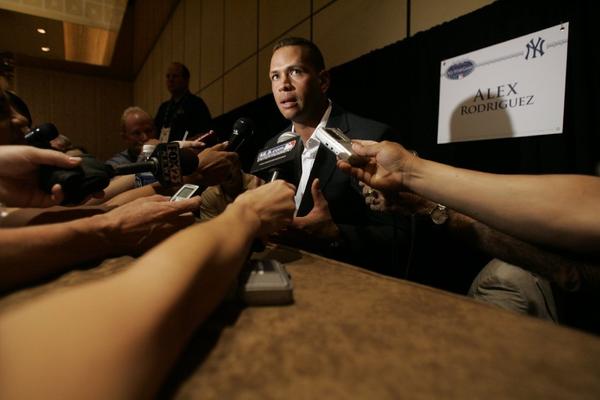 As Major League Baseball opened its historic Monday of drug suspensions with 12 players reportedly accepting 50-game suspensions — and with discipline of the game’s active home run leader, Alex Rodriguez, likely still to come — a scientist laid out what should be next in the effort to nab cheaters.
Tom Brenna, a Cornell University chemistry professor who assisted the U.S. Anti-Doping Agency’s case against cyclist Floyd Landis and serves on the multisport Partnership for Clean Competition, said biological passport testing is critical.
Of the four major U.S. sports, only MLB has begun the longitudinal testing, storing blood and urine samples they collect from players to monitor how a player’s levels change over time.
With that data, testers can declare a positive result or pursue targeted testing like a specific test for the presence of synthetic testosterone or more frequent blood testing to find the banned energy-boosting substance EPO.
“There’s a great deal of discussion right now about finding designer steroids, about chasing compounds we haven’t seen yet,” Brenna told The Times in a telephone interview Monday. “It’s a neck-and-neck race right now between anti-doping authorities and the pro-doping people, where a book of testing methods can be followed quickly by a book of how to get around the methods.”
Doping experts like BALCO founder Victor Conte say they suspect athletes are beating current tests by micro-dosing testosterone and using fast-clearing EPO and human growth hormone.
Brenna’s argument for biological passport testing is that “you’d have a chance of making a substantial dent in things by looking at the physiology changes of athletes.
“When it changes abruptly from the last test, then something’s happening. With that type of testing, we have a better chance of getting out in front of this thing.”
USADA and the World Anti-Doping Agency employ biological passport testing, which can differentiate blood chemistry changes caused by doping as opposed to those resulting from increased physical activity.
“That ability to take and keep those snapshots over time is important,” Brenna said.
The problem in U.S. professional sports is introducing such testing into existing collective-bargaining agreements when football, basketball and hockey are less than two years into their new labor deals.
The NBA and NFL are attempting to have HGH testing in place for their coming seasons.
Meanwhile, Fox Sports first reported Monday that MLB has been told 12 players have accepted 50-game suspensions for their connection to the Florida anti-aging clinic Biogenesis.
That case was built by MLB securing documentation and cooperation from key figures at the clinic, including its founder.
The list of suspended include Texas Rangers slugger Nelson Cruz, Detroit Tigers shortstop Jhonny Peralta, San Diego shortstop Everth Cabrera, Philadelphia reliever Antonio Bastardo, New York Yankees catcher Francisco Cervelli and Seattle catcher Jesus Montero.
Three other players linked to the facility — Oakland pitcher Bartolo Colon, Toronto outfielder Melky Cabrera and San Diego catcher Yasmani Grandal — have already served 50-game suspensions for positive test results.