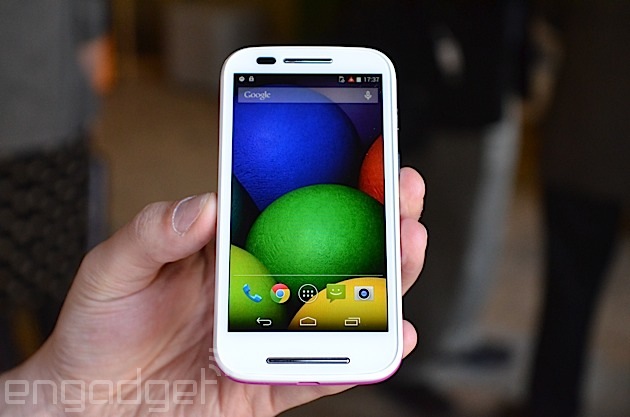 It’s hard not to love the Moto G, it being an incredible handset for the asking price and the benchmark against which other affordable smartphones should be judged. A lot’s happened since that phone’s release, though, namely the news of Lenovo’s planned acquisition of Motorola from Google. Motorola may be facing new leadership, but recognizes it’s on to a good thing with low-cost, high-value Android hardware, today announcing another smartphone of that nature, the Moto E.

As a retailer leak suggested, the Moto E has slightly weaker specs than that of the G, with a 4.3-inch, 960 x 540 display (covered by Gorilla Glass 3 and an anti-smudge coating), 1.2GHz dual-core Snapdragon 200 processor, 1GB of RAM, 4GB of internal storage (with a microSD slot for more), a 1,980mAh battery and a 5-megapixel main camera.
The company is touting durability as one of the phone’s key attributes. Its body is covered with water-resistant coating in addition to the Gorilla Glass front panel. Like the G before it, you’ll be able to customize the handset with a number of different rear shells of varying colors and textures. It’ll run (almost stock) Android 4.4 KitKat out of the box, and Motorola has committed to at least one major update cycle. Motorola’s also crafted a few apps to launch alongside the Moto E with a focus on location sharing, including “Location Status” which sends a message to a nominated person when you leave or arrive a particular destination, and “Meet me/Follow me” which helps you to track down a friend in a crowd. Most importantly, the Moto E is launching this week for an unlocked price of $129 in the US and £89 in the UK.
We had a quick play with the new device at Motorola’s launch event in London, and it’s not much of a departure from the X and G that came before it. A tad shorter than the the G, due to its smaller 4.3-inch display, but more or less a ringer otherwise. The same clean, tight design logic can be seen in the E, including the curved back cover and plain face sans any kind of soft key. Not as plain as we might’ve liked, though, as the large and lurid speaker grilles on the front of the device don’t quite seem to fit among the relative simplicity of the rest of the phone. It’s nice and light but with that sturdy, robust build quality that betrays its price point.
Thumbing through the home screen and app drawer, first impressions are that performance will certainly be adequate, and during the on-stage announcement, Motorola called out the Galaxy S4 for being slower than the E in basic metrics like time to return to the homescreen from within an app. It’s obviously not as capable as the S4 in terms of raw power, but if we’ve learnt anything from the Moto G, it’s that Motorola knows how to get the best of mediocre components.