4 hours ago .Donald J. Trump @realDonaldTrumpNASDAQ HAD ITS 23RD RECORD CLOSE OF THE YEAR. OTHER EXCHANGES ARE FOLLOWING CLOSELY BEHIND. TREMENDOUS POTENTIAL RE… https://t.co/AuNA13yrFM

13 hours ago .Donald J. Trump @realDonaldTrumpThere is a rise in Coronavirus cases because our testing is so massive and so good, far bigger and better than any… https://t.co/2wD9VkoQya

13 hours ago .Donald J. Trump @realDonaldTrumpHe cannot pass the test I “aced”. He should give it a try!!! https://t.co/4U6pny2D6y

13 hours ago .Donald J. Trump @realDonaldTrumpRT @yalinunez: ”For Latino businesses USMCA increases the opportunities for their goods and services to access to international markets.” ⁦…

13 hours ago .Donald J. Trump @realDonaldTrumpRT @ACTforAmerica: America is coming back stronger than ever before!

13 hours ago .Donald J. Trump @realDonaldTrumpRT @ACTforAmerica: Who do you trust most?

13 hours ago .Donald J. Trump @realDonaldTrumpRT @ACTforAmerica: Imagine if the left was focused on coronavirus instead of impeachment back in January.

13 hours ago .Donald J. Trump @realDonaldTrumpRT @ACTforAmerica: The Obama/Biden Administration is the most corrupt in history! 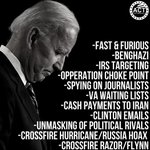 13 hours ago .Donald J. Trump @realDonaldTrumpRT @ACTforAmerica: Nancy Pelosi’s district is in ruins while she does NOTHING but criticize President @realDonaldTrump https://t.co/iuuIwZ4…

17 hours ago .Donald J. Trump @realDonaldTrumpMail-In Ballots will lead to massive electoral fraud and a rigged 2020 Election. Look at all of the cases and examp… https://t.co/v7ZVCkujeD

17 hours ago .President Trump @POTUSRT @realDonaldTrump: .@CNN should move Fredo back to the morning slot. He was rewarded for bad ratings with a much better time slot - and a…

17 hours ago .Donald J. Trump @realDonaldTrump.@CNN should move Fredo back to the morning slot. He was rewarded for bad ratings with a much better time slot - an… https://t.co/Y2Os2xjWSL

I somehow missed this slice of Port Oranges underbelly when it was originally  written back on Dec 9th and am only seeing it as published on Pat’s blog now for the first time on Dec 31st.

Let me say from  the outset, that I do not know if what the Gardners are alleging is factual and I extend Jack every benefit of the doubt.

If ½ of what the Gardners say occurred then it will be nothing new as the  Manager and  Community Development have been applying a different, softer  less compliant law for the Riverwalk  developer friend of the Mayor’s  for years now,  AND Council has raised no meaningful objections …..Why is that ???

WHY  it was only last week when people asked why buddy had no permit box up on his property to house his  permit and plans,  that the City sprang  to his immediate defense and said he didn’t need one,   And  as for the plans well the inspectors would keep copies in their vehicles.   That’s funny because I have had permit boxes up on my property on  4 different occasions now and inspectors never once kept copies of my plans in their vehicles .

This is all so crooked and corrupt AND the truth is that nothing has changed since the former Manager and his CFO left with their sweetheart pensions and severances.  This is still a stumble bum operation with full portions of neglect,  corruption and incompetence being run in a consequence free zone for the Manager and his staff.

These allegations are disgusting and they need to be investigated and hopefully refuted, or otherwise confirmed by other than the Manager, who if he had any interest or credibility in this matter would have taken appropriate action back in August when he was first appraised of the alleged un-permitted tree and vegetation removal.

Accordingly at your first meeting in  2014   Will you agree  to hire an outside investigator, with authority to subpoena  if  necessary, to refute or confirm these allegations, which if confirmed would amount to serious disregard of the Port Orange land development ordinances ??.

If County Council can undertake such an independent action to assure citizens regarding possible corrupt practices in their operation,  Why should the Port Orange Council  offer any less independent assurance to those same citizens.

“Cronyism … and Given Port Orange’s Recent History of Incompetence at High Administrative Levels …. “

We own the property, and reside, at 618 Ruth Street in Port Orange, Florida. Our property backs up to a two-acre-plus parcel that is currently under consideration by the City of Port Orange for development as a multi-use commercial project involving boat sales, repair and storage. Principals in the development are Jack Wiles and Brad Wiles (father and son) of East Central Florida Boat Works doing business as Atlantic Marine. Jack Wiles is well known to elected city officials and staff members through his activities within the local financial community and on local government advisory boards.

Our experience to date has been that Jack and Brad Wiles have blatantly violated the provisions of the City of Port Orange Land Development Code and that the City has aided and abetted these violations by not enforcing its own ordinances. The Code very clearly states its intent in Ch 9 § 9 that “the purposes of this article are to:

1) acknowledge the environmental benefits of trees and natural vegetation,  2) prohibit the destruction of natural vegetation until a development plan, or other specific plan for interim land management has been approved, and   3) provide specific criteria for allowable clearing and grading activities as they affect tree preservation.”

More detailed specifications regarding the type of documents required before a developer can begin to clear property abound in the Code. However, when Jack and Brad Wiles caused the removal of trees and natural vegetation from the Atlantic Marine property without an approved Site Plan or even a Tree Removal Permit, and City officials were notified of this violation, they chose to ignore their own ordinances and instead allowed what amounts to wholesale clear-cutting of the land to continue.

“all violations of this article involving the unauthorized removal of trees and vegetation shall require the land owner to file a restoration plan as provided for below.”

Instead, they issued a Tree Removal Permit that would be laughable in its deficiencies were it not for the damage already done by the developers. All natural barriers between the Atlantic Marine development and at least ten adjoining properties have now been removed and homeowners in the neighborhood are reasonably asking what recourse they have available to them.

When we voiced our concerns to staff in the Planning and Code Enforcement Departments, their responses were pleasant enough but they also clearly indicated that nothing substantive would be done about them. It is fairly obvious at this point that when it comes to protecting the health, safety and welfare of its citizens, the City of Port Orange places more importance on the wishes of insiders than on the protection of average citizens. Cronyism seems an appropriate term to use for this practice, and given Port Orange’s recent history of incompetence at high administrative levels, not an unsurprising one.

Please let us know what solutions, if any, you can offer within the existing City framework for grievances before we look for solutions outside that framework.

One Opinion on “If True, This is so Crooked and Corrupt”